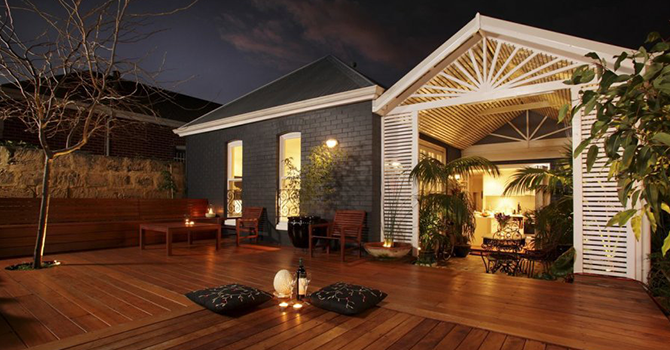 Richard and Tatum had a small compact backyard with restricted access. Yet they love to entertain and tend to their vegie patch. The grass was not growing because of the southern facing aspect and lack of penetrating sunlight, and the courtyard was just too small to be practical. There was not enough room for seating… and the vegie patch was not to be touched! As busy professional people they also required a low maintenance solution, that would also expand their entertainment options.

Working closely with the owners, a design was laid out that addressed all the problems. First to go was the grass. This was excavated and removed from the property – with wheelbarrows due to the restricted access! Next, large L shaped bench seats were custom made on site around an existing tree that provided shade. A sun deck and entertaining deck were added, and the yard was now beginning to look like a resort. Instead of hiding the vegie patch it became a feature, and access to it was improved through utilising new courtyard steps. The final touch was the addition of some wonderful mood lighting.

Richard and Tatum were proud to have their ‘work of art’ featured in a the WA Best Outdoors annual coffee table magazine.

WA Timber Decking collaborated on the design and lighting, and supplied the sight works, customised seating, sun deck and entertaining deck, and all the sealing of the timbers.

“Being in the landscape architecture profession myself, I asked around and was pretty quickly told WATD were the best. We were not disappointed. Paul is a genuine craftsman that takes real pride in his work and he has a great team of people working with him. If you want quality this is it.”